The Dyslexia Show was originally planned for March 2020 but due to Covid and the following isolation/lock down restrictions it could not be held until this March. However as we got nearer to the start date and, once it became clear that it was going to proceed, the excitement and interest level of delegates and exhibitors increased.

The show was opened at 9.30am on 25th March by Matt Hancock who then gave the first talk of the day in the Keynote Theatre. Matt, who is also dyslexic, is preparing a Private Members’ Bill to lay before Parliament to ensure that all primary schools introduce universal screening for dyslexia alongside providing better teacher training and support for dyslexic children. We wish him well in his endeavours.

Prior to opening the show Matt Hancock visited all the exhibitors in turn to find out about them and their products. Matt spent several minutes with us asking about the Flexitable range and having the grids demonstrated for him.

It would be an understatement to say that the show was not well received. The speakers, delegates and parents who came were all enthusiastic about the show focusing on the problems of pupils not being assessed quickly and then having to find good tutors and resources to help them. The exhibitors all tried to provide answers to these and many other problems.

On a personal level we were extremely busy demonstrating Flexitables over the 2 days. We had visitors come to our stand who had travelled to the NEC by car, train and even flying down from Scotland for the day. What was interesting to hear from them was how simple and effective they found Flexitables to use and what good value they were for a non-technical low cost resource.

The exhibition proved to be popular with everyone that we spoke to and the organisers have, therefore, been confident enough to book the hall for another show in 2023.

We hope to see you there!

The recent closure of schools due to the problems caused by the Covid19 pandemic has made many parents consider alternative ways of educating their children the most obvious (and popular) being Home Schooling. Some of the numerous benefits of Home Schooling are shown below: the choice of curriculum which can be suited to the needs… END_OF_DOCUMENT_TOKEN_TO_BE_REPLACED

How long will the grids last with all the continual folding? We have been selling the Flexitables for over 20 years and we have never had any product returned or received a complaint regarding the PVC tearing along any of the horizontal or vertical channels. Are the grids easy to clean? Yes. Just wipe them… END_OF_DOCUMENT_TOKEN_TO_BE_REPLACED 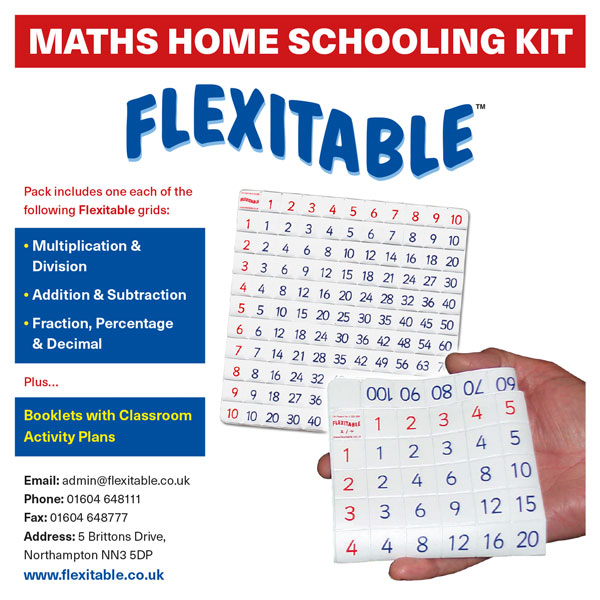